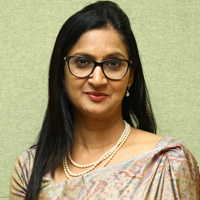 Dr. Sushi Singh is the Managing Director of SSRRC, she has planned, organized and executed several programmes in Jaitpur Village in Gautam Buddha Nagar which has been taken up as " Model Village- Mera Gaon, Meri Jimmedari".Realizing that girls of the village are not being sent to school for want of money, Girl child Education assistance programme was launched and most needy children were selected after a detailed survey and were provided necessary monetary help. Several Eye check-up, Blood donation, Health check-up camps, AIDS Awareness and cancer awareness programmes have been held for the village youth and elders. Computer literacy programme had been undertaken for the willing youth of the village. Village children are motivated to participate in cultural and sports activities.

She has over 25 years of experiences as an educationist, a social activitist and a researcher. She has worked extensively in the fields of education in India & abroad providing educational consultancy and helping in establishment of institutions and capacity building. Her passion for continuous learning earned her a degree of Associate from Higher Education Academy, U.K in 2012. She is a Post Graduate in Natural Science and earned PhD Degree for her work in the field of 'Vehicular Pollution and its Effects on School Children' from The Netherlands. She has always made efforts to upgrade her skills and in that pursuit completed Diploma in Computer Science and French from Alliance Française, Bangladesh and She has successfully completed a number of small courses to enrich her knowledge and expertise which includes "E –moderation" and "Certificate of Academic Practices I "course from Lancaster University, UK.

During her long career she devised innovative teaching techniques with the use of technology and tried to impart education for a holistic development of personality for her pupil in all schools she had been associated with as teacher, head of the institution or Administrator. Her passion for education made her a winner in establishing first English medium school in adverse circumstances at "Chittagong, Bangladesh" in 2003.

Her passion and dedication towards community has been exemplary. She gave up her assignment of CEO of Educomp Foundation for revival and strengthen of Police Families Welfare Society (PFWS). She as newly appointed Vice President of PFWS with an ambition plan, meticulous planning and strategy of 9 months created a history of connecting with 80,000 plus police personnel across the city. Her social initiative "Wajifa" to help out deserving and needy personnel in the fields of academics, sports, special education and support to deceased wards became landmark and inspiring tales amongst families of police personnel across 11 districts. The sustainability of projects being conducted on newly established 10 welfare centres is an example for other welfare societies of para military forces.

As Assistant Professor & Programme Director of Student Development Centre of GDGWI/Lancaster University, she was concerned with the overall development of the students to become empathetic leaders and global citizens. She developed an International Voluntary Programme with Lancaster University and as Director of International Exchange Program conducted theme based 'summer exchange programme' for students of various campuses of Lancaster University and exposed them to community, Government and academia in India for consecutively 3 years. Vice Chancellor of Lancaster University & British Parliament Member Mr. Tom had appreciation for her concept of churning out social ambassadors. Articles published by her include "Corporate Social Responsibility in B Schools" in Chronicle (Vol8, July 2010) and "E-moderation-a challenge" on Hastchep.com and other articles in newsletter of BRICS CCI.

As a Governing body member of Chamber of BRICS, INDIA chapter she is also actively engaged in Research and Development of Higher Education, CSR advocacy relevant to member countries. As convener of CSR vertical of BRICS CCI, She launched the Centre on 19th Oct, 2015, and is known for organising mega events of "National CSR Roundtable Conference" in 2015 and first Green Summit in North East in 2016.

In recognition of her organizing ability and her passion for the social cause, she was awarded a trophy of "Best blood donor organizer 2013"by Indian Red Cross Society. Her contribution in the fields of education was recognized when she was awarded of the prestigious" National Pride Award" as "Dr. S. Radhakrishnan National Memorial Teachers & Media Award, 2013 on the occasion of Teachers Day, 2013".In the year 2015, She was awarded by Nari Udghosh Magazine "the women achiever award" for selfless contribution in the field of education with a focus on women and children. She had been invited by Gandhi Smriti and B & S Foundation as to be a part of "Beti Bacho, Beti Padhao". In March 2016, she was bestowed upon the prestigious "Savvy Honours" by none other than Megna publications & Naree Hira. She was featured in Stardust & Savvy magazine as "Community Queen". She has been nominated for women entrepreneurship award 2017 by Arya Bharat Manav Seva Samiti. For her selfless contribution in the field of Education, she was recognized with "Bharat Nirman Award" in January 2017 at India International Centre, New Delhi..